No matter what type of lifting you do, if you’re serious enough about it, at some point you’re going to realize you want chalk.

If you’re an Olympic lifter then chalk is essential for gripping the bar on the lifts and protecting your hands from all reps and reps of pulls. If you’re a Crossfit athlete then chalk is critical if for nothing else, the insane amount of pull-ups that show up in so many workouts.

Finally, if you’re a Powerlifter chalk is a huge help for both Deadlift and Bench.

If you have chalk in your gym, then you need someplace to put it. Gym chalk (aka magnesium carbonate) generally comes in blocks and is prone to breaking apart as you use it.

This is where chalk buckets come in. Chalk buckets provide a simple, but super necessary feature. They help keep chalk at least somewhat contained.

What’s the Best Chalk Bucket For a Home Gym? 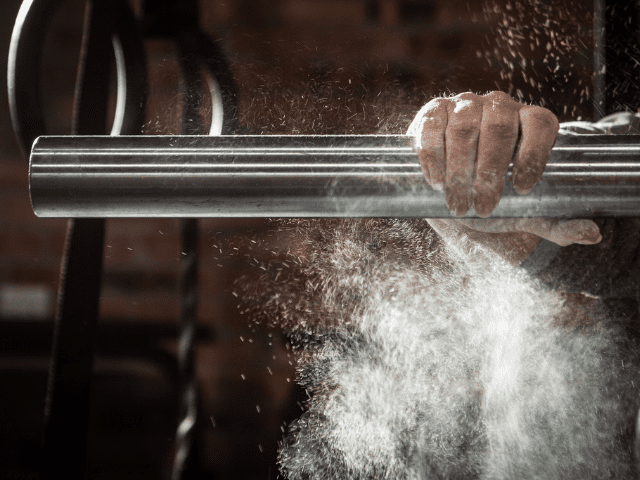 Some things I think are worth spending some good money on (like a squat rack for example) and getting something as nice as you can afford and there are other pieces for your home gym where I think you can save some money. (This money saved can then go into the expensive stuff)

Here’s the good news. Not only can you pick up a really good chalk bucket for cheap, but chances are also you already have one laying around your kitchen.

In my opinion, the best chalk bucket for a garage gym is a medium sized Tupperware container.

There are a few reasons a Tupperware container makes for a perfect DIY chalk bucket.

First off, it doesn’t take up a lot of space. Sooner or later space will start to become a premium concern for any garage gym. The last thing you want is a big, heavy chalk container taking up too much space.

Second, a Tupperware container is mobile. Doing Cleans in one part of your gym? Sit the bucket right next to you. Got pull-ups on the other side. Take the bucket with you. Something that’s attached can’t do that.

Is it the biggest pain in the world having to walk 7 steps over to your bucket? No, probably not. But, always being able to have your gym chalk right beside you is pretty nice.

Finally, it’s CHEAP!!! A Tupperware container is going to be either free, cause you have one sitting in your kitchen cabinet right now or at most a buck or two.

Plus, even though it’s a cheap alternative, it doesn’t really look or feel cheap. It’s clear plastic so the chalk itself becomes the main focal point.

You’d be shocked at how many people have seen my “Chalk Bucket” and told me, “I can’t believe I never thought of that.”

Maybe you agree with me that a Tupperware container makes the perfect chalk bucket. It is possible though that you’re just not quite sold on the idea. All good.

Here are some other good options for a home gym chalk bucket.

It’s always interesting when starting at a new school (I’ve worked as a College Strength Coach/Sports Scientist for almost 20 years) to see how the previous staff did certain things and how they arranged the weight room. Everybody always has their own unique ways of doing things.

I tell you that to tell you this. I took over at a school that was using Home Depot 5 Gallon Buckets for their Chalk Buckets. I hated them. I hated everything about them. I thought they were cheesy at best and a cheap unprofessional joke at worst.

But, before I had a chance to replace them they started to grow on me.

I ended up loving them. Loved them for the practical reasons of being easily mobile and deep which helps contain chalk dust. What seemed cheap at first, now felt gritty, no nonsense and tough.

For these reasons, a 5 gallon bucket will always hold a special place in my heart.

The only reason I like a Tupperware container for my garage gym over a 5 gallon bucket is size. That big of a bucket is going to need too much chalk to be practical when it’s generally just me lifting in the gym.

If you want to grab your own 5 gallon bucket for your own unique chalk bucket, you can order one from Home Depot or even from Amazon.

If you want something designed specifically for holding chalk and/or something that is going to look a little nicer then one of these last two options might be for you.

The first is called the Chalk Pot.

Imagine if the Tupperware bowl that I was speaking so highly of earlier was custom designed, branded and contained a magnet that allowed you to ‘stick’ your chalk bucket to a steel rack.

That, essentially, is the Chalk Pot. I’m not going to lie, they’re really sharp and still not very expensive (about $20 – $25).

The main reason I didn’t get a chalk bucket is that I initially built a DIY Squat Rack made out of 4x4s. Since I didn’t have metal to ‘stick’ the bucket to, I’d basically end up with a really cool looking… Tupperware container.

However, now that I have a steel power rack I’ve been very tempted recently to get a Chalk Pot. If this sounds like the best fit for your gym, you can head over to Rogue and pick up a Chalk Pot.

Want something really nice for your garage gym?

This Rogue Monster Mounted Chalk Bowl will look amazing in any home gym. Made of stainless steel, this bowl will attach to most standard racks. (Definitely check your rack measurements before purchasing)

This is easily the nicest chalk bowl you could ask for for your gym. I also love it because it doesn’t take up any floor space. Finally, it’s about $40 cheaper than any other comparable options that I could find.

Most other “high end” chalk buckets start at $100 or more. If you’re looking for something that is sure to impress the Monster Chalk Bowl is a great option. Order your Monster Mounted Chalk Bowl from Rogue here. 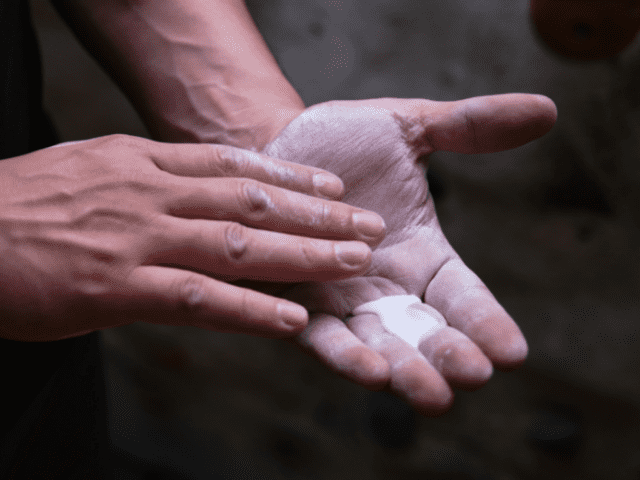 If all of this chalk bucket talk is starting to sound like too much of a hassle, there are gym chalk alternatives that you can try instead.

The most popular (and best performing) alternative to standard block gym chalk is liquid chalk.

Liquid chalk is basically exactly what it sounds like. It comes in a tube and is squeezed and applied to your hands almost like a lotion would. Some brands, like SportMedIQ, only need to be applied once at the start of your session.

If the thought of chalk dust being all over your gym is starting to give you anxiety, give liquid chalk a try.

When you’re buying everything you need for your garage gym there are the essential things like barbells, bumpers and a rack. Then there are the not-so-obvious but still necessary things like chalk and a chalk bucket.

I’ve given you my best recommendations for chalk buckets at 4 different tiers. You just have to decide what kind of look you want to go with and how much money you’re willing to spend.

Once you do get your chalk bucket, just remember that chalk is meant to be used and applied with the chalk still in its block form. Sure pieces are going to chip off, but don’t go breaking your chalk up into a fine powder like some kind of animal.

Pull-Ups are, in my opinion, the ultimate upper-body exercise. There is no other exercise (yes, this includes Bench Press) that is more effective at building upper body strength and size. However,...

Bicycle Crunches are a simple yet extremely effective core exercise. They work the entire abdominal region and don't require any equipment. However, sometimes you may find yourself wanting an...

Best Flooring For a Garage Gym

How Much Does a Hex Bar Weigh?