When shopping for a new elliptical, there are a lot of features that go into the decision-making process. How smooth is it, how much incline does it have, does it have a tv and what’s the price are all popular means to which to filter through ellipticals until you find the one you want.

But, there is one feature that is often overlooked, but sooner or later is going to become a very real logistical concern when you’re trying to move it.

What is the weight of the elliptical!?!

In this article, I’m going to give you some examples of how much some of the most popular ellipticals weigh to potentially help you with your buying decision and give you a few tips when you find yourself in the unenviable position of having to move one of these things.

Editor’s Note: I’ve also listed the User Capacity weight of each elliptical as well. These are the manufacturer’s listed limits – I’ve not personally tested the weight capacity of any of these ellipticals.

How Much Does a Nordictrack Elliptical Weigh? 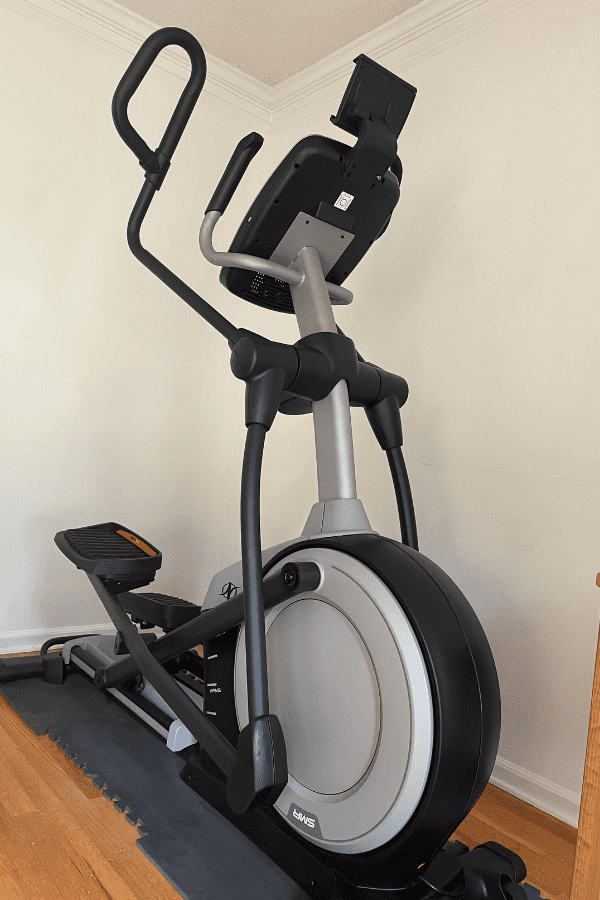 One of the most popular brands of ellipticals is Nordictrack. It’s actually the brand of elliptical that I have in my gym (I have a C9.5 that I believe they don’t make anymore).

The 7 Nordictrack Ellipticals ranged in weight from 206 pounds to 287 pounds with the average weight being 237.7 pounds.

The FS14i and FS10i are two of Nordictrack’s Free Stride (FS) Ellipticals. They can function as an elliptical, stepper and treadmill.

How Much Does a Precor Elliptical Weigh?

The other thing that stood out to me when researching all the Precor treadmills was how similar each of them was in weight. The lightest elliptical (308 pounds) and the heaviest elliptical (340 pounds) are only 32 pounds apart from each other.

Finally, even more similar was the user capacity weight. All 9 Precor ellipticals had the same User Capacity weight of 350 pounds.

How Much Does a Sole Elliptical Weigh?

Sole had weights listed for 6 of their 7 models. They ranged in weight from 212 pounds to 265 pounds with an average weight of 234.5 pounds.

For what it’s worth, Sole also had the highest listed User Capacity with 3 of their ellipticals boasting a 400-pound user capacity limit.

*No Machine Dimensions were given on the E20’s product page.

How Much Does a Proform Elliptical Weigh?

Unfortunately, only one of the Proform Ellipticals had the weight of the machine listed. That was the Pro HIIT H14 which has a listed weight of 224 pounds.

How Much Does a Schwinn Elliptical Weigh?

Does an Elliptical Weigh More Than a Treadmill?

Obviously, this depends heavily upon the individual models you’re comparing. Out of the 31 elliptical models that I researched they ranged in weight from 100 pounds to 340 pounds with an average weight of 241 pounds.

I also researched the weights of 27 treadmill models and they ranged in weight from 50 pounds to 500 pounds with an average weight of 270 pounds.

All in all, an elliptical and a treadmill are going to be pretty similar in weight. It really just depends on the exact models that you’re comparing.

How Do You Move an Elliptical?

If you find yourself in the unenviable position of needing to move an elliptical, there is some good news.

So, as long as you’re moving the elliptical on flat ground, say, from one end of the gym to the other then ellipticals are actually pretty easy to move.

Going up and down stairs or in and out of a truck if you’re moving an elliptical or taking it in or out of a house gets a bit more tricky. I would highly recommend having at least one, if not two, strong helpers to help navigate any stairs.

If you came here looking for how much an elliptical weighs, I hope this guide filled with the weights of the most popular brands of ellipticals helped out.

I’ve also done guides on the weights of other pieces of gym equipment like how much squat racks weigh and how much hex bars weigh. You may want to check those out as well.

link to Kettlebell Swings vs Deadlifts (Which is Better?)

Hip thrusts are a powerful exercise that can help to build strength and muscle in the glutes, hips, and thighs. Basically, Hip Thrusts are an advanced version of a Glute Bridge where weight,...

Best Flooring For a Garage Gym

How Much Does a Hex Bar Weigh?